Top cylinder lubricators were originally designed for flathead engines, used widely in auto, marine, and tractor engines until the 1950’s. These usually had primitive splash lubrication systems. Little or no oil made it to the valve stems or seats, and sticking valves was a common problem, usually requiring removal of the cylinder head to remedy. The use of a top cylinder oiler was a simple solution to the problem – a vapor of oil mist in the air/fuel mixture was all that was required to prevent this issue, and engines ran smoother and lasted longer as well. Gasoline was leaded at this time.

Tetra-ethyl lead was removed from USA gasoline in the mid 1970’s. By this time, most auto engines were overhead valve design, so stuck valves was no longer an issue. The lead in gasoline served two purposes: it acted as both an octane booster, but more importantly as a lubricant that prevented valve material from eroding and fusing to the valve seat, which was often nothing more than cast iron. Once again the top cylinder lubricator solved the problem of premature valve failure. Later engines were designed with hardened valve seats, and harder valve materials to prevent this problem. Gasoline formulation changed several times over time – remember MBTE? Bad stuff!

By the mid 2000’s, most gasoline available in the USA had a 10% ethanol content, mandated by the EPA, for a variety of reasons, both political and environmental. This level is likely to go higher in the near future. Ethanol is a ‘dry fuel’, along with CNG and LPG, and has no lubricating properties. Ethanol also attracts water, and is causing a host of problems, especially in older fuel systems and engines. LPG and CNG conversions are gaining in popularity, mainly due to the cost difference between these fuels and gasoline. There is no way of adding lubricity to a compressed gas. It is time once again for the top cylinder lubricator to prevent  expensive and inconvenient repairs!

The latest generation of direct fuel injection (DFI) engine designs, made by Audi, Volkswagon, BMW, and Ford, among others, are having serious problems with extreme carbon buildup on the backsides of intake valves and manifolds, an unintended consequence of technology, which often requires costly mechanical disassembly for removal of these build-ups. DFI engines have their fuel injectors directly in the combustion chamber, in comparison to port injection engines, which have the injectors in the port runners. The solvent effect of gasoline vapors flowing over the valve stems and heads is no longer there. Only air and crankcase/exhaust vapors flow over the intake valves. DFI engines run higher compression ratios and are very fuel efficient, but run at higher temperatures that are causing the crankcase vapors to bake onto the valve heads. Fuel additives have no effect in preventing this problem, as no fresh fuel flows over the intake valves. Noticeable power loss and rough running are the result, as this problem occurs in as little as 30,000 miles from new! The top cylinder lubricator is a cost effective, easy preventative solution to this latest of engine problems.

Any engine that operates under constant high loads – marine, stationary, and tow vehicle engines – will benefit from the use of a top cylinder lubricator. High loads and temperatures cause valve seat recession, where the exhaust valve erodes the valve seat material until leakage and ultimate failure occur.

We are passionate about engine preservation, and are confident that the use of the Ampco top cylinder lubricator will greatly extend the life of any engine – classic, antique, dry fuel, and modern.

Ampco oilers are a vintage item. They are new old stock and were manufactured around the same time as Marvel oilers, and were MADE IN AMERICA! These are not reproductions. This is truly a quality item.

There were several manufacturers of top cylinder oilers. Ampco, Marvel, and White were the most popular. Marvel and White lubricators are no longer available.

An inventory of NOS Ampco oilers, in storage for over 40 years, was discovered in 2005, and are now being offered by Ampco Lubricators LLC. There is a finite supply – when they are gone, there will be no more! Get yours while they last! 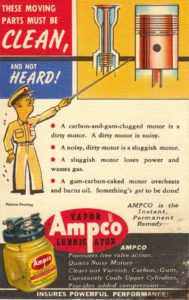